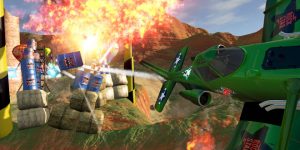 New plane is finally here. After considering player feedback* and some more brainstorming, we decided to call it ‘Ghost Duster‘.
Most planes were also tuned and hopefully got more character. ‘Ghost Duster’ should be better for longer races while Bullet-AX can now handle high speed and straight races better than other planes (and live up to its name).

T-Force also got a new skinless look, probably a bit silly. Just remove skin from T-Force to check it out.

Also a new license track called ‘Blow Up Run‘ is here, waiting for best times to be set.

* Special thanks goes to HellfiresGhost for a plane name idea.